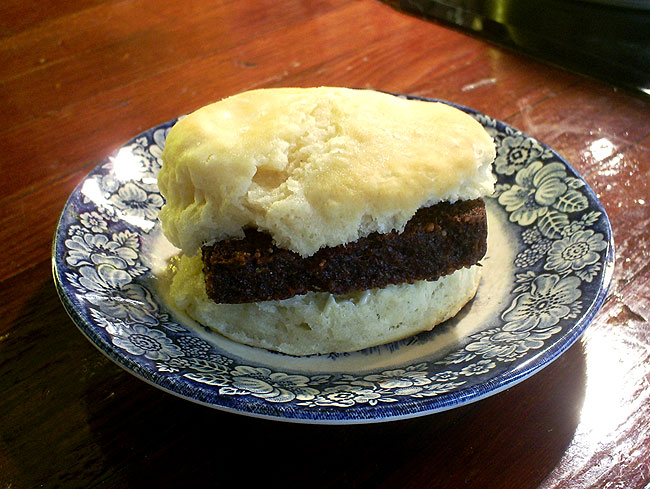 One of the great mysteries around Kings Mountain, North Carolina back in the Peggy’s Restaurant days was always why the livermush biscuits at Peggy’s tasted so much better than anywhere else. The answer might surprise you. Here’s how you can make your own.

MamaPeggy.com
One of the great mysteries around Kings Mountain, North Carolina back in the Peggy's Restaurant days was always why the livermush biscuits at Peggy's tasted so much better than anywhere else. The answer might surprise you. Here's how you can make your own.
Print Recipe Pin Recipe
Prep Time 20 mins
Cook Time 20 mins
Course Breakfast
Servings 8 people

So… What Is Livermush?

It’s quite possible some of you don’t even know what livermush is. Livermush is a Southern food product composed of pig liver, head parts, and cornmeal, most commonly spiced with pepper and sage. In our neck of the woods in the foothills of North Carolina (or more specifically in Kings Mountain, where Mama Peggy was from and Peggy’s Restaurant operated), livermush was thought as a Southern delicacy.

But the truth is, it originates in the Carolinas. Shelby, North Carolina, the city just west of Kings Mountain, hosts an annual Livermush Exposition and is home to two of best known brands of livermush, Mack’s (which was used at Peggy’s Restaurant) and Jenkins. Other North Carolina cities which host livermush festivals are Drexel and Marion.

Livermush is typically pan fried, but at Peggy’s Restaurant it was deep fried in what we called the fry-o-later. Deep frying gives the livermush the delicious outer crust that most folks who has them associated with a Peggy’s Restaurant livermush biscuit. You don’t have to eat livermush on a bisuict, though. It’s just at home taking the place of bacon or sausage on a Southern breakfast plate of eggs and grits.

Just for the record, the only people who think livermush is “similar to scrapple” are Yankees. Similar in concept, maybe, but vastly different in result. Most Southerners won’t touch scrapple, no way, no how.

Liver mush is indeed the “poor man’s pate”.. I wish more people knew how to fry it correctly and that it tastes so good….

I love Livermush! when I lived in Gastonia I ate Sterwart and Long. Am i showing my ae?

I grew up in Gastonia and every time I go home I get Liver Mush. I miss Stewart and Long Too!

Would like the recipe! Hog head baked and meat off the bone,mix with corn meal,onions, anything else you add?

I live in Shelby and wish I had the opportunity to try her food. Thank you for keeping southern recipes alive! Almost all are comfort food and anyone born and raised in the Carolinas, these recipes bring back precious memories of time and people past. I know my children will keep these recipes alive too. God bless and thanks for sharing!